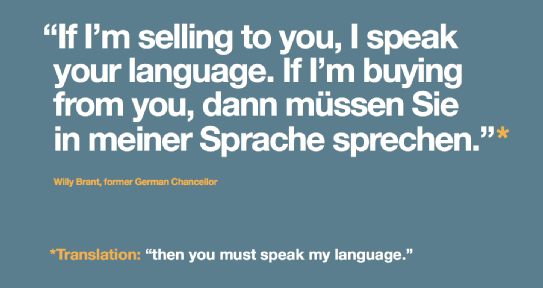 Translation became the focus of one news story this June as the British government met embarrassment over its translation of Theresa May’s Brexit Plan. The British government sought to do a favour to EU officials in translating the Brexit white paper into their own languages, but instead the translations fell short of seeming fluent, especially in the case of the translation into German which was reportedly an “unreadable” document with “archaic” language. The finished products lacked the flow of a native speaker and Kerstin Pfeiffer tweeted that:

“The opening paragraphs of the German version provide enough material for at least 2 seminars on pitfalls and problems in EN-DE translation,"

The front-page description even contained a mistake with the spelling “Deutsche”, and one German official stated he opted to read the document in its original English. It appears that the German translation was not done by a professional translator nor by a native German speaker.

The French translation came under scrutiny too with strange phrasing such as “un Brexit vertueux," - "virtuous Brexit”. While the names ‘Estonian’ and ‘Finnish’ were misspelled in the Estonian and Finnish versions.

The Institute of Translation and Interpreting (ITI) responded to this kerfuffle explaining that the “time pressures and volume of work” with this project would have to be taken into account when assessing the quality of the work. However, they further stated that expectations of the UK’s ability to “communicate effectively in other languages” has not been great and that this translation blunder will not have improved perceptions of the UK’s foreign language proficiency.

Furthermore, this news story may have further implications as it highlights the lack of foreign language skills in Whitehall. In the age of convenience, machine translations and quick, non-professional translators, this minor embarrassment may act as an alarm for the UK. It indicates the importance of professional translators. Effective language communication is going to be key to UK international relations during and after Brexit. The ITI claim that “post-Brexit dealings for diplomacy and trade mean that language skills and cultural empathy will be more important than ever” and after June’s botched translation May’s government Britain may need to pull its communicatory socks up.

If you need to translate something important make sure you use a professional service with native speaker translators such as Midland Technical Translations. For more information contact us on this number +44 (0) 844 856 1086 or email enquiries@midlandtechnical.co.uk.